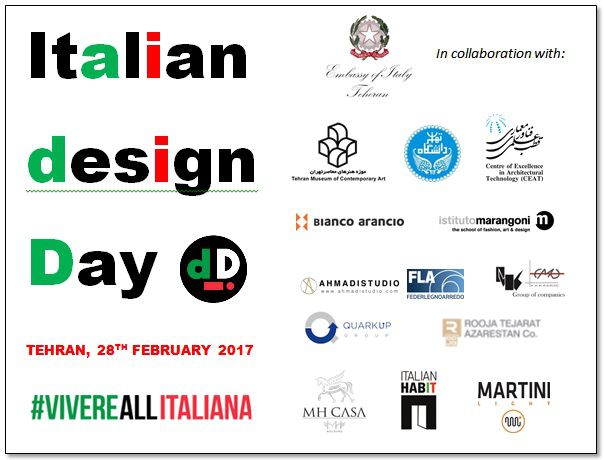 The Ministry of Foreign Affairs and International Cooperation has launched the first edition of the Italian Design Day, to be held simultaneously around the world on March 2, 2017. The event precedes the opening of the Salone del Mobile in Milan. In over 100 cities will be organized by the diplomatic-consular network and the Italian Cultural Institutes of the various cultural and economic promotion initiatives on Italian design. In Tehran the “Day of Italian Design was held on 28 February 2017. For the occasion, the Embassy of Italy has scheduled two seminars initiatives in collaboration with the Museum of Contemporary Art in Tehran and with the Centre of Excellence Architecture technologies of the University of Tehran.

Ahmadistudio was speaker in both seminars receiving great attention and interest from the public. While the morning has been dedicated to professionals of the field of design, the afternoon has been topped by the curiosity of the university students. In his speeches Arash Ahmadi, founder of Ahmadistudio, spoked about the close connection between Design and the City of Milan. Starting from the Futurist movement he exposed the steps that led Milan to be internationally recognized as the design capital. Speaking of Design and Milan he could not leave out two key players such as the Triennale and the Salone del Mobile.

In his speech Arash Ahmadi retraced the most important aspects of Iran’s participation at the 2016 Triennale, stressing the important role played by the young Iranian designers. Arash Ahmadi subsequently remembered that Salone del Mobile is an important event for the Iranians and how Federlegno and Assoufficio are investing in this country. A prove of this interest will be the east pavilion for workplace3.0 of the 2017 edition of Salone del Mobile, where two traditional elements such as the bazaar and the Persian garden were chosen by Ahmadistudio to realize the workplace of the future.

Cancel
Our WebSite use Cookies to Gather information that help us provide the best possible service. By using this site, you are accepting our Cookies Policy.OkRead